View at EarthSky Community Photos. | Composite image of Comet C/2020 F3 NEOWISE, captured by Marsha Kirschbaum in San Leandro, California, on the morning of July 5, 2020. She wrote: “It was a really early a.m. wakeup call for me. This icy celestial visitor survived its pass by the sun to put on a splendid show at 4:45 a.m. this morning. After a night and early morning of the dull background roar of fireworks punctuated by really loud ‘bombs’ with the smell of smoke, I was really doubtful I would see the comet because of the haze. And there was a lot of it as can be seen on the horizon in this image. I couldn’t quite see it with the unaided eye, but my 200 mm lens saw it just fine. My kind of celestial fireworks.” Thank you, Marsha!

We still have to wait for another very bright comet, what astronomers call a great comet. There’s no strict definition for great comet, but everyone agrees that Hale-Bopp – widely seen by people in 1997 – was one. Lesser comets are moderately frequent, though, and, right now, there’s a nice binocular comet in the dawn sky. Some skilled observers have reported that – once you spot it with binoculars – you can remove them and see the comet with the unaided eye. Using binoculars or other optical aid is a must, though, if you want to see this comet’s split tail. The comet is called C/2020 F3 (NEOWISE). In this post, we provide charts (below) that can help you see this celestial visitor.

Comet NEOWISE was closest to the sun on July 3, 2020, passing at about 26.7 million miles (43 million km) from the sun, or a bit closer than the average distance from the sun to Mercury. Observers are still reporting seeing it, and so it appears to have survived the close encounter with our star.

Comet C/2020 F3 (NEOWISE) is up at dawn now and should remain in the dawn sky until around July 11. Then it will temporarily disappear below the horizon while making a transition to the early evening sky, becoming visible again in the evening around July 15-16.

If the comet remains relatively bright, it might be easier to see in the second half of July during evening dusk, because, at that time, it will appear somewhat higher in the sky.

During the first days of July, Comet NEOWISE is a little tricky to catch because it appears not against a dark sky, but very close to the northeastern horizon just as dawn is brightening the sky.

Yet skilled astrophotographers are catching it and producing some glorious photos.

Here are a few charts for early this week that might help you see the comet. Again, it will probably be best seen in binoculars. If you don’t have binocs but do have a good camera, a great alternative is to capture a few seconds long exposure image of the approximate area of the sky. Try at different magnification or zoom settings, and the results should reveal the comet’s nice tail.

Now, take a look at these charts. The first one shows the planet Venus, which is the third-brightest object in the sky (after the moon and sun). If you are standing facing east, looking at Venus, look to the planet’s left to see the bright star Capella. The comet will be below Capella on the morning of July 6. Then note that it moves toward the north (to the left, as you stand facing east) with respect to Capella on the mornings of July 7 and 8. 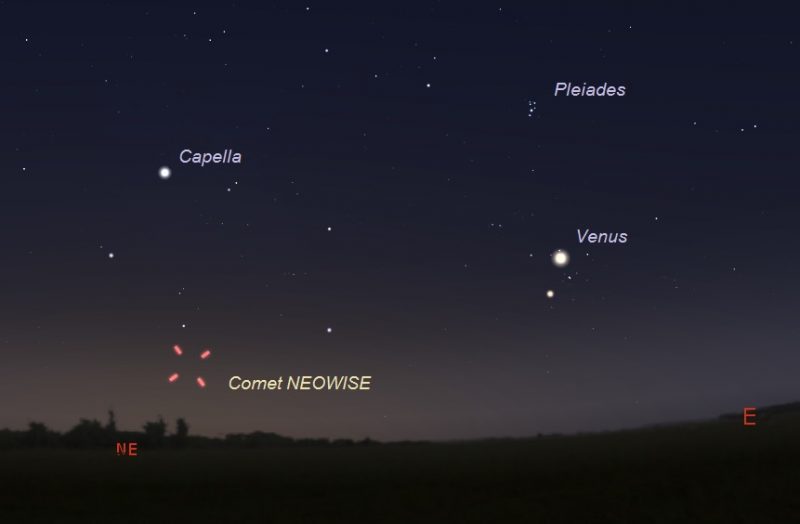 Wide-sky view showing the location of Comet C/2020 F3 (NEOWISE) just before dawn on Monday, July 6, 2020, as seen from central U.S. facing northeast about 45 to 60 minutes before sunrise. Venus is the very bright planet, while Capella is a bright star seen towards the northeast now, at dawn. Illustration by Eddie Irizarry using Stellarium. 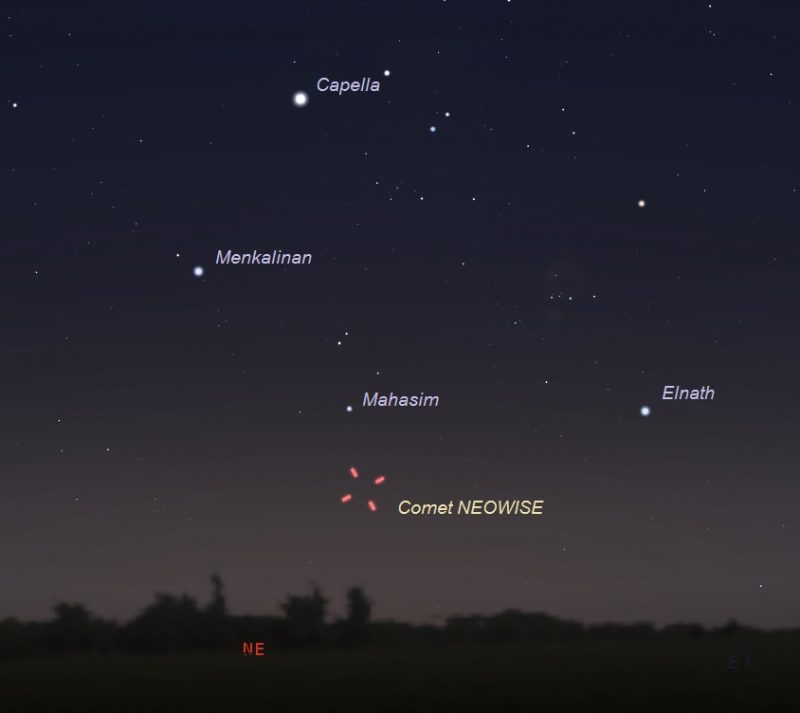 A closer look. Comet NEOWISE just before dawn on Monday, July 6, 2020. Look for bright star Capella in the northeast, then find these other visible stars below it (Menkalinan and Mahasim). You may find Comet NEOWISE below these stars, as seen here. Using binoculars or long-exposure photography is highly recommended. Illustration by Eddie Irizarry using Stellarium. 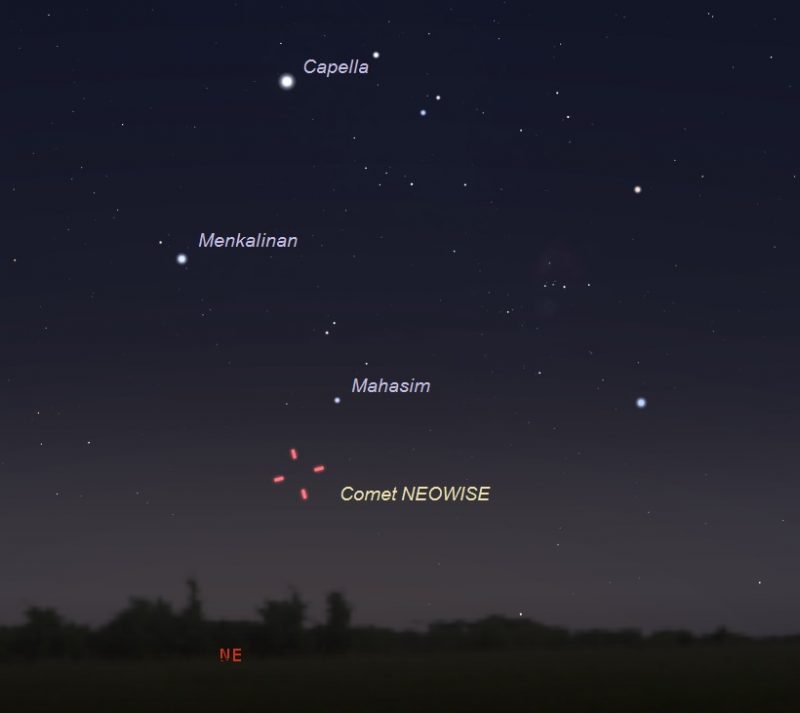 Location of Comet C/2020 F3 (NEOWISE) just before dawn on Tuesday, July 7, 2020, as seen from central U.S. facing northeast about 45 to 60 minutes before sunrise. You can see here that Comet NEOWISE appears a little more to the left (north) each day. Illustration by Eddie Irizarry using Stellarium. 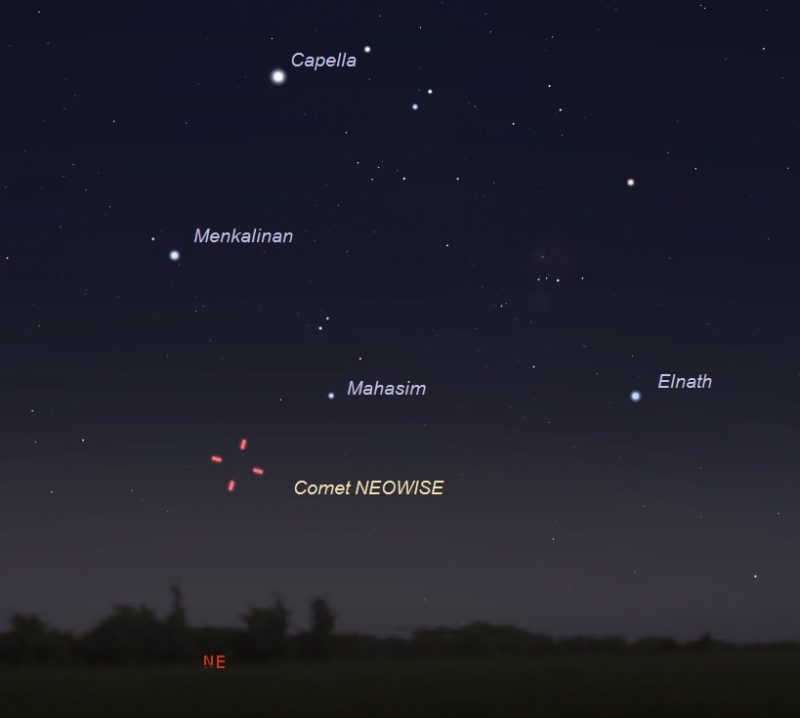 Comet NEOWISE just before dawn on Wednesday, July 8, 2020, as seen from central U.S. facing northeast about 45 to 60 minutes before sunrise. The comet should remain in the dawn sky until around July 11. For additional charts, try TheSkyLive.com. Afterwards, Comet NEOWISE will temporarily disappear below the horizon while making a transition to the early evening sky, becoming visible again in the evening around July 15-16. For evening charts, see below. Illustration by Eddie Irizarry using Stellarium.

As of early July, reports indicated that Comet NEOWISE has a visual magnitude between 1 to 2. If you know the magnitude scale, where smaller numbers indicate brighter objects, that may sound very bright! However, stars are pinpoints of light, whereas the light of comets is diffuse (spread out). So, for comets, a magnitude of 1 or 2 is fainter than it would be for a star of equal magnitude. The reason is, the comet’s light is distributed over a relatively wide area, instead being concentrated in a single point. 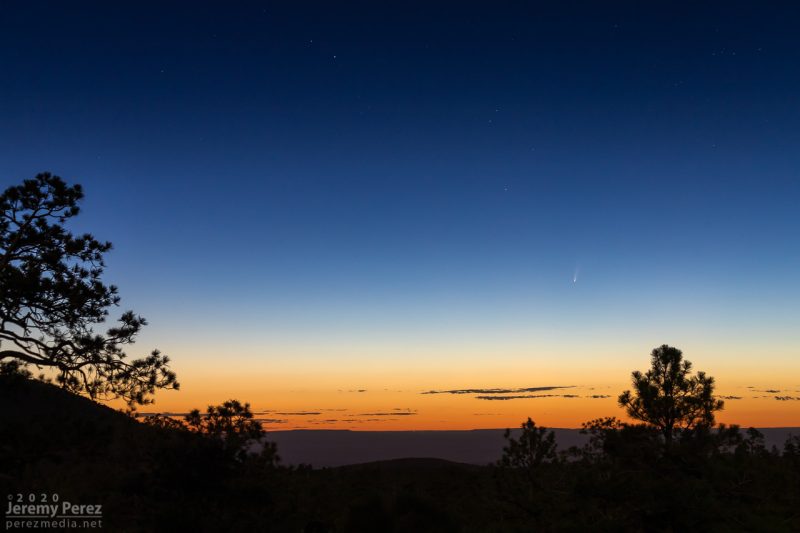 This image – taken on the morning of July 5, 2020, by Jeremy Perez at Sunset Crater in Arizona – shows Comet C/2020 F3 (NEOWISE) on the same scale that you might see it with the eye alone. Try to use binoculars to reveal all the beauty of this comet. Used with permission. Thank you, Jeremy!

Another July 5 shot of comet C/2020 F3 (NEOWISE) by Jeremy Perez in Arizona. This one is more of a close-up. “It was an easy naked-eye object,” wrote this experienced sky observer, who was looking in a desert sky, “but really rewarding through binoculars.” Used with permission. Thanks again, Jeremy!

Comet NEOWISE has been seen even from the International Space Station!  Russian cosmonaut Ivan Vagner says the comet’s tail is clearly visible from the space laboratory’s cupola. Look at this amazing image:

Its tail is quite clearly visible from the @Space_Station!#ISS #comet #NEOWISE pic.twitter.com/FnWkCummD6

Here is another great image by Philipp Salzgeber from Austria:

Now look below for are a couple of evening charts, for later this month. Comet NEOWISE will be closest to Earth on July 23, 2020. It will pass at some 64 million miles (103 million km) from our planet. The good news is that – if the comet continues looking great – the view during the night of closest approach should be nice. Although binoculars might be required for the celestial visitor, it will be visible at the same time we see a beautiful crescent (not too bright) moon. 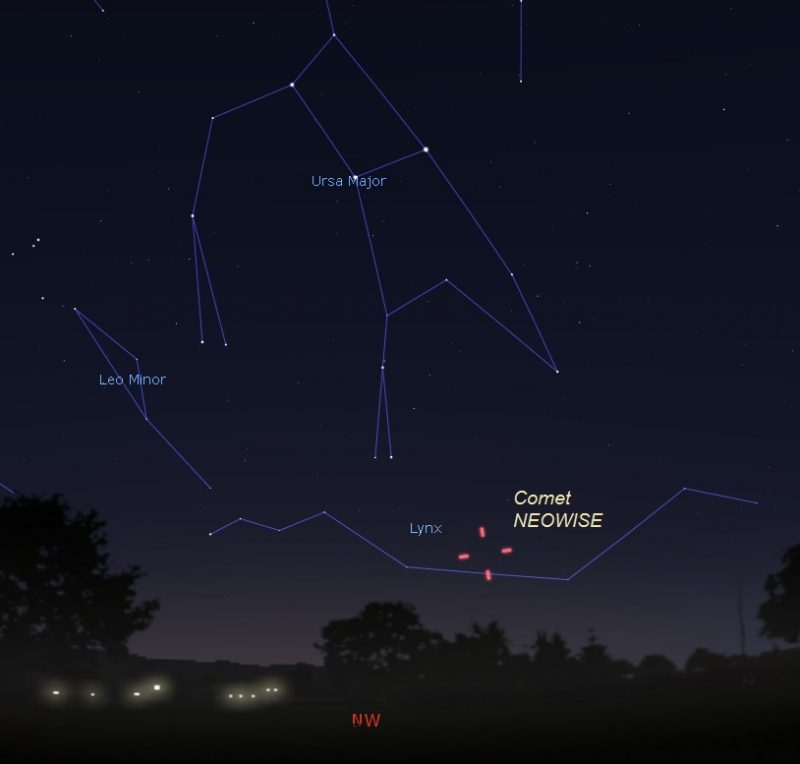 As a reminder, around mid-July, comet NEOWISE reappears early in the evening sky. This illustration shows location of the celestial visitor on July 15,2020. As seen from the central U.S., facing northwest just after sunset. Illustration by Eddie Irizarry using Stellarium.

Location of Comet NEOWISE on the night of closest approach to Earth (July 23, 2020). As seen from the central U.S., facing west-northwest just after sunset. Illustration by Eddie Irizarry using Stellarium.

In the meantime, it’s still a good idea to get up early in the morning this week and try for a glimpse of Comet NEOWISE while it’s still relatively bright, just in case it gets fainter later in the month.

And forget about making plans to view this comet’s next apparition in Earth’s skies. Comet NEOWISE might be visible again from Earth, but not until around year 8,786!

Bottom line: Comet C/2020 F3 (NEOWISE) is basically a binocular object, although some experienced observers with pristine skies are reporting they can see it with the eye alone. This post has information and charts that will help you see the comet.