A woman, along with her adult son and husband, have been charged in the fatal shooting of a Family Dollar security guard, after he refused to let her daughter enter the shop without a face mask amid the coronavirus pandemic.

Calvin Munerlyn, 43, a father of six, was shot dead on Friday around 1.40pm while working at a Family Dollar store located at 877 Fifth Avenue in Flint, Michigan.

Sharmel Teague, her husband Larry Teague, 44, and her son Ramonyea Bishop, 23, have been charged with first-degree premeditated murder and gun charges.

Munerlyn had told Sharmel she had to leave the store because her daughter lacked a mask, leading Teague to argue with the security guard.

A short while later two men later entered the store. Larry Teague yelled at Munerlyn about disrespecting his wife and Bishop shot Munerlyn in the back of the head, according to Genesee County Prosecutor David Leyton.

Sharmel Teague has been arrested but Teague and Bishop remain at large. 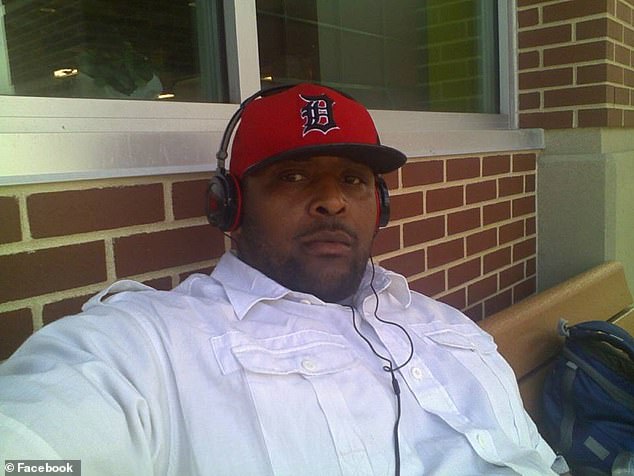 Three people have been charged with murder for the fatal shooting of Family Dollar security guard Calvin Munerlyn, 43, (above). He was killed on Friday in Flint, Michigan following an argument over a customer failing to wear a face mask in accordance with state lockdown orders 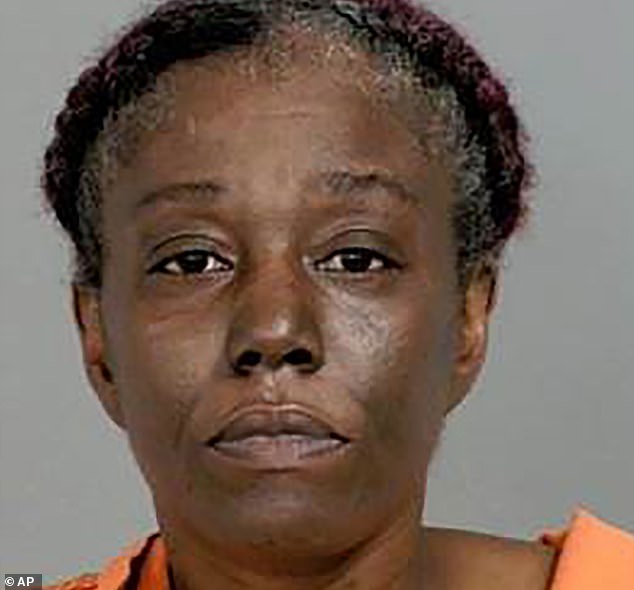 Sharmel Teague (above), her husband Larry Teague, 44, and her son Ramonyea Bishop, 23, have been charged with first-degree premeditated murder and gun charges in Munerlyn’s death. Sharmel got into an argument with Munerlyn after he denied her daughter entry into the store because she did not have a face mask on 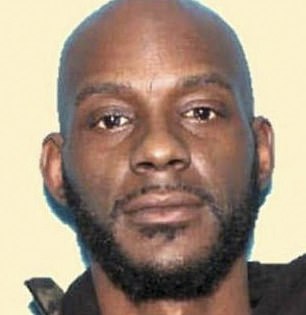 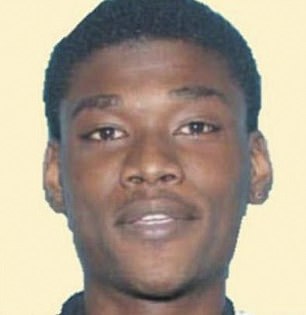 While Sharmel has been arrested, Larry Teague, 44, (left) and Ramonyea Bishop, 23, (right) are still at large 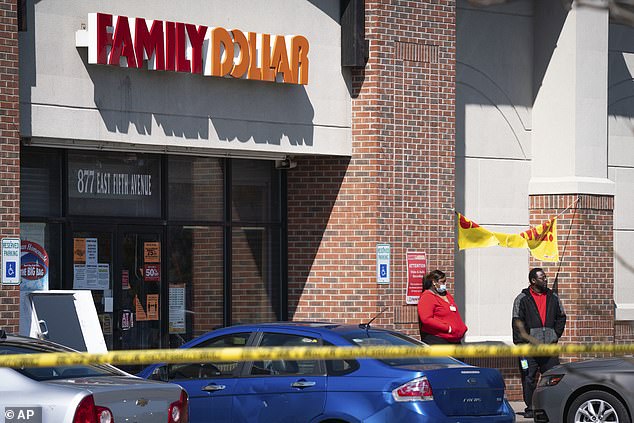 The shooting took place at the Family Dollar located in downtown Flint, Michigan on Friday

The premeditated murder charge in Michigan carries a mandatory sentence of life in prison with no chance of parole if they are convicted.

No information has been released about the daughter that was not wearing a face mask.

‘From all indications, Mr. Munerlyn was simply doing his job in upholding the Governor’s Executive Order related to the COVID-19 pandemic for the safety of store employees and customers,’  Leyton said in a statement Monday.

‘It is important that the governor’s order be respected and adhered to, and for someone to lose their life over it is beyond comprehension,’ he added.

Munerlyn was left laying in the doorway suffering a gunshot wound to the head.

He was taken to Hurley Medical Center, where he later succumbed to his wounds.

He was a doting father and beloved member of the community, known to his loved ones by his childhood nickname, ‘Duper.’ 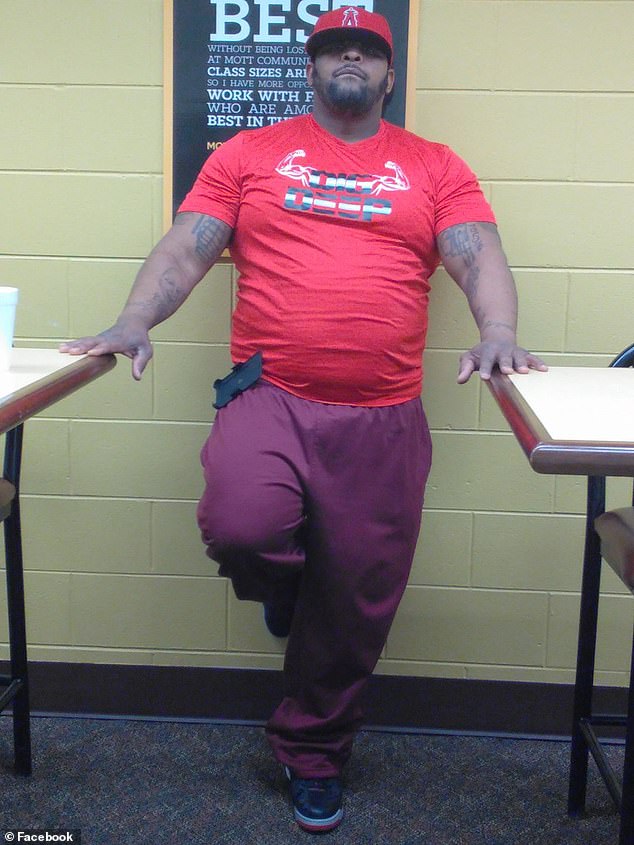 Munerlyn was a doting father-of-six and beloved member of the community, known to his loved ones by his childhood nickname, ‘Duper’ 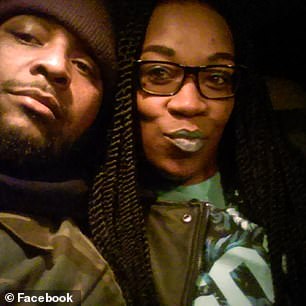 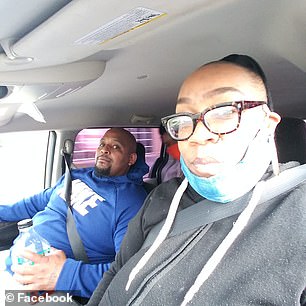 Munerlyn leaves behind his wife of 10 years, Latryna Sims-Munerlyn (left and right), and their six children

He is survived by his wife of 10 years and their six children.

Munerlyn’s eldest son also works at the same Family Dollar store but was not present when his father was killed.

After opening fire on the security guard, the suspects fled toward high-rise apartment buildings located behind the store.

On Sunday, about 150 relatives and friends gathered outside the Family Dollar on Fifth Avenue for an emotional candlelight vigil honoring Munerlyn.

Munerlyn’s mother, Bernadett, said she wants justice for her son.

‘They didn’t have to take my baby and it wasn’t that serious,’ she said.

‘All you people just have to do is listen to the law, listen to the governor. Just stay home. If you don’t have to come out, then you wouldn’t need a mask unless you’re out getting groceries or necessities. All my baby was doing was his job working and doing his job.’

‘It is incredibly sad that in this crisis that this life was lost. We are mindful of how important it is that people keep a level head, that we do the right things protecting ourselves and protecting others,’ Gov. Whitmer told reporters Monday. 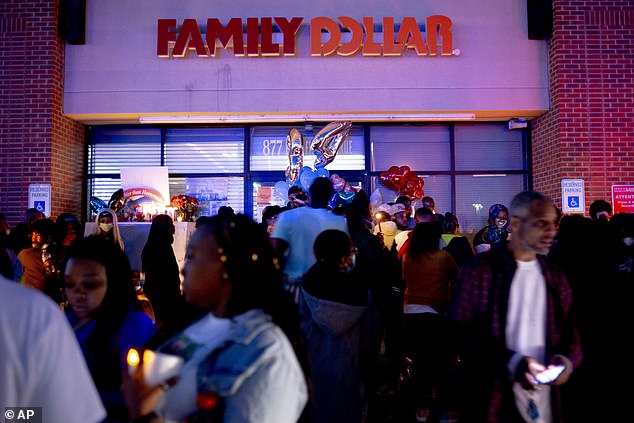 On Sunday, about 150 relatives and friends gathered outside the Family Dollar on Fifth Avenue for an emotional candlelight vigil honoring Munerlyn 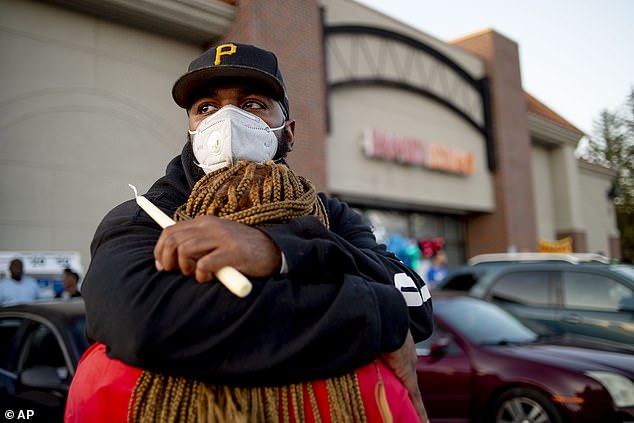 Pete Tedford, a cousin of Calvin Munerlyn, and Dorothy Nelson, the victim’s sister, hold each other closely outside a Family Dollar store on Sunday 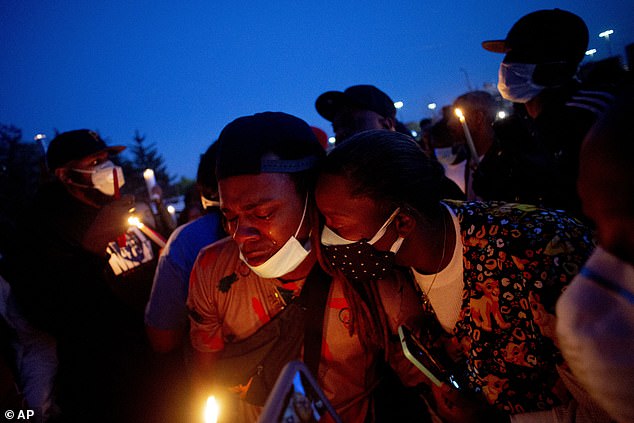 Maalik Mitchell, center left, sheds tears as he says goodbye to his father, Calvin Munerlyn, during a candlelight vigil on Sunday 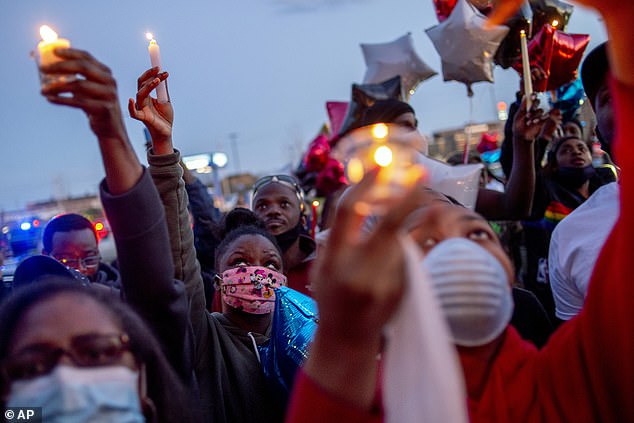 Family and friends lift their candles to the sky and release balloons to honor Munerlyn, who was allegedly killed after barring a customer from entering the store without a mask 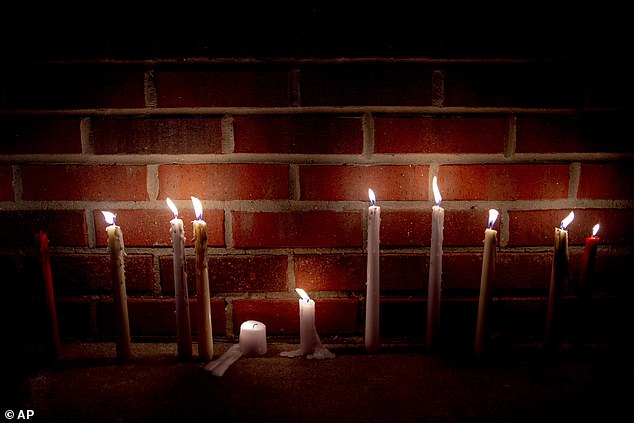 Candles are left lit next to a wall of the Family Dollar store on Fifth Avenue, where Munerlyn had worked as a security guard for a little more than one year

His wife, Latryna Sims-Munerlyn, told MLive.com that she first learned of the shooting when her son called her on Friday afternoon, telling her to get to the discount store.

‘I just instantly thought my baby was gone,’ she said during the vigil.

Munerlyn was hired at the store a little over a year ago after working security in Michigan for decades.

He was described by loved ones as a loving husband and father who enjoyed spending time with his family.

Munerlyn was also known for helping those in need, including at-risk teenagers in the community.

A family member has launched a GoFundMe campaign seeking donations to help with Munerlyn’s funeral expenses.