Donald Trump has furiously defended his response to combating the coronavirus, showing clips of New York Governor Andrew Cuomo praising him and yelling at reporters who questioned his record.

In a briefing that stretched an hour and 31 minutes Sunday, the president also held up a Wall Street Journal op-ed that approved of his response.

‘What I’m doing is I’m standing up for the men and women that have done such an incredible job,’ he said when a CNN reporter asked why he was devoting so much time to showcasing praise with more than 40,000 Americans now dead. ‘Nothing is about me,’ the president insisted.

‘You’re never going to treat me fairly, many of you. And I understand that. I got here with the worst, most unfair press treatment they say in the history of the United States for a president,’ Trump complained. ‘They did say Abraham Lincoln had very bad treatment too.’

New York’s Andrew Cuomo, who has consistently locked heads with the president in recent weeks, unloaded on Trump on live television Friday, mocking his demand for gratitude for federal help and saying: ‘Thank you for doing your job’.

Cuomo followed this up with another swipe in his Saturday briefing where he recited Lincoln’s famous quote – ‘a house divided itself cannot stand’ – and said there is ‘no time for politics’. 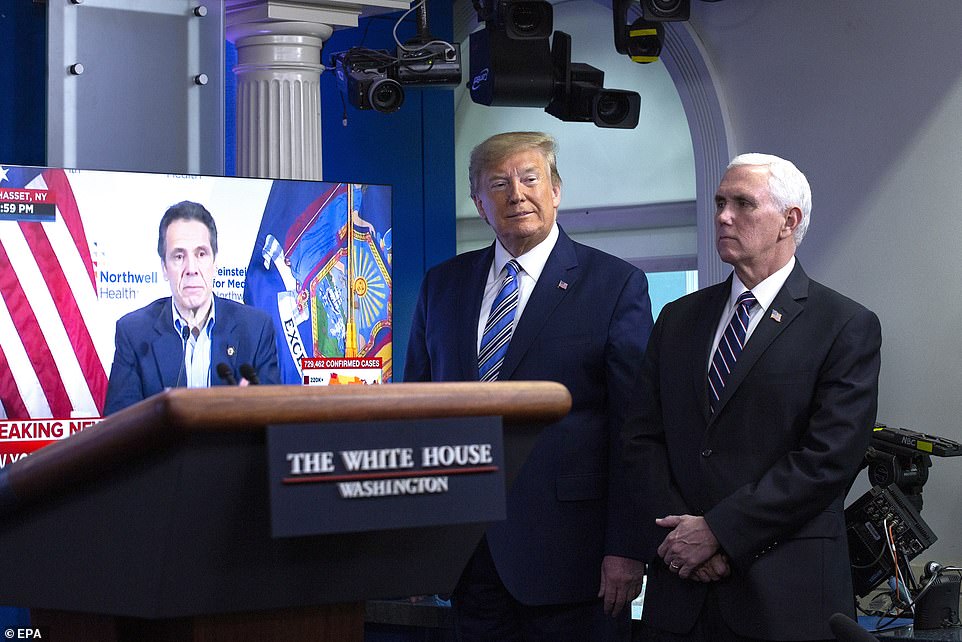 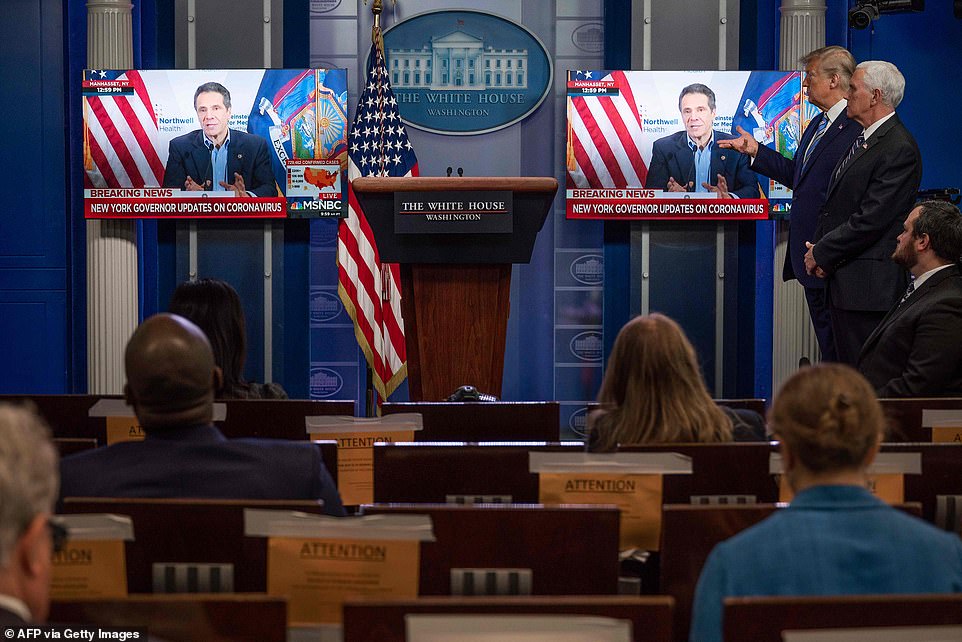 Trump had trouble playing the first clip of Cuomo’s Sunday press conference, as it cut off before it got to the ‘good part’ 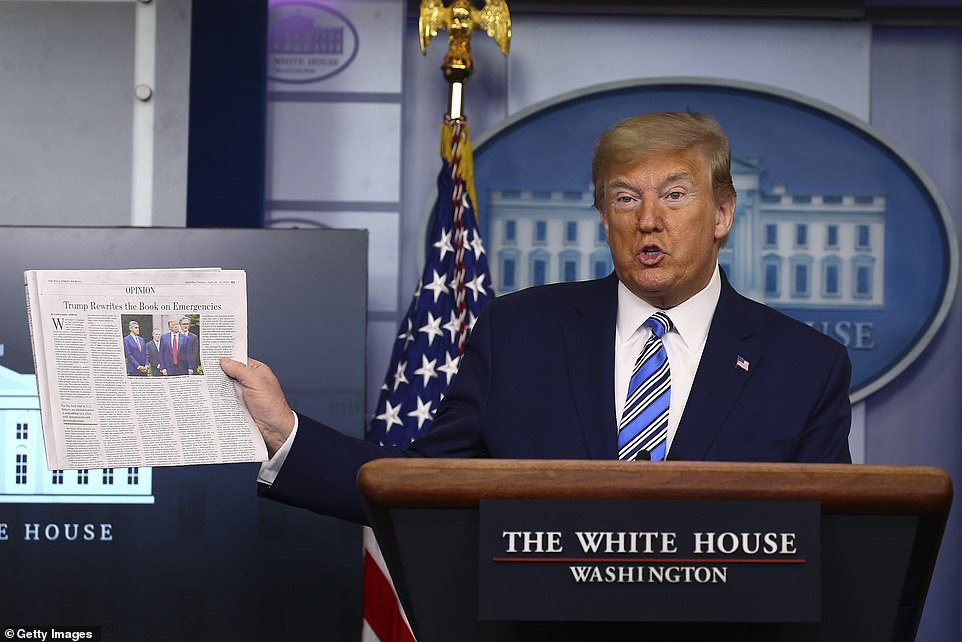 The Trump administration and Congress expect an agreement Monday on an aid package of up to $450 billion to boost a small-business loan program that has run out of money and add funds for hospitals and COVID-19 testing.

‘We are very close to a deal,’ Trump said Sunday at the White House.

Along with the small business boost, Trump said the negotiators were looking at ‘helping our hospitals,’ particularly hard-hit rural health care providers.

Trump made some news at the briefing – he said negotiations with Capitol Hill were ‘getting close’ to adds funds to the Paycheck Protection Program.

He also said he would utilize the Defense Production Act in order to increase the production of swabs.

The president then held up a swab and pulled it out of the packaging so the photographers in the room could get good visuals.

He then handed it off to Vice President Mike Pence, saying he could give it to his wife, Karen.

But Trump mostly used visuals in the briefing room Sunday to promote his own record.

After pulling out the positive Wall Street Journal op-ed he then began reading it to the room.

Trump also played clips of Cuomo twice, complaining that in the first clip ‘they left out the good part’.

The video segments were from a press conference the New York governor held Sunday morning.

‘The federal government stepped up and was a great partner,’ Cuomo said in the first clip shown at the White House. ‘I’m the first one to say it. We needed help, and they were there.’

The United States has by far the world’s largest number of confirmed coronavirus cases, with more than 750,000 infections and over 40,000 deaths.

Cuomo said of Trump Friday: ‘First of all, if he’s sitting home watching TV, maybe he should get up and go to work, right. Second, let’s keep emotion and politics out of this and personal ego if we can because this is about the people and our job and let’s try to focus on that.

Walter Shaub, former director of the Office of Government Ethics, tweeted: ‘Beyond being another taxpayer-funded campaign ad, this video clip also makes Trump look exceedingly weak. The video casts Cuomo as Trump’s boss giving him a performance appraisal. (If only!).’

The president also told one reporter to ‘keep your voice down, please’. 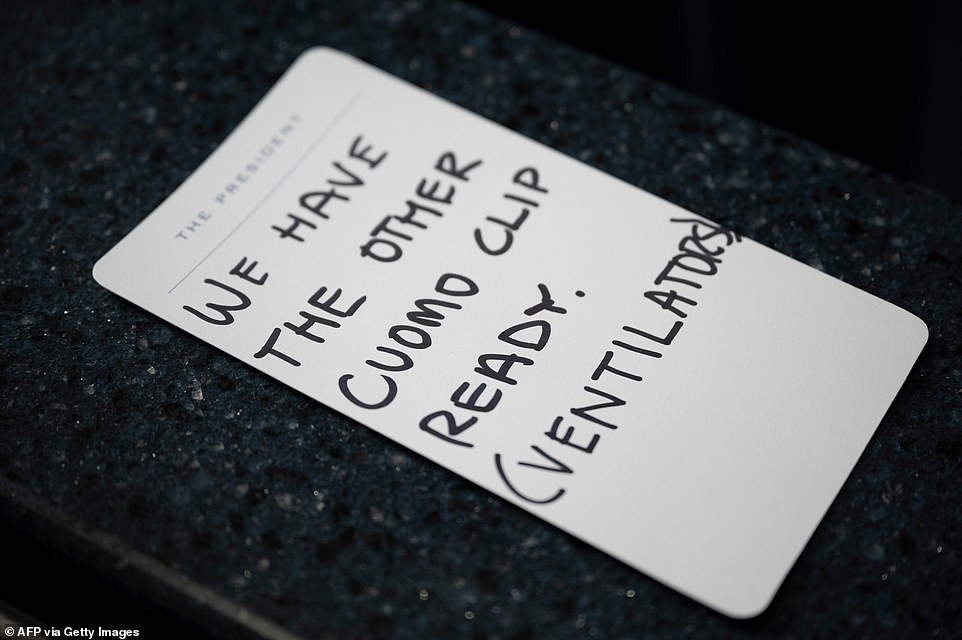 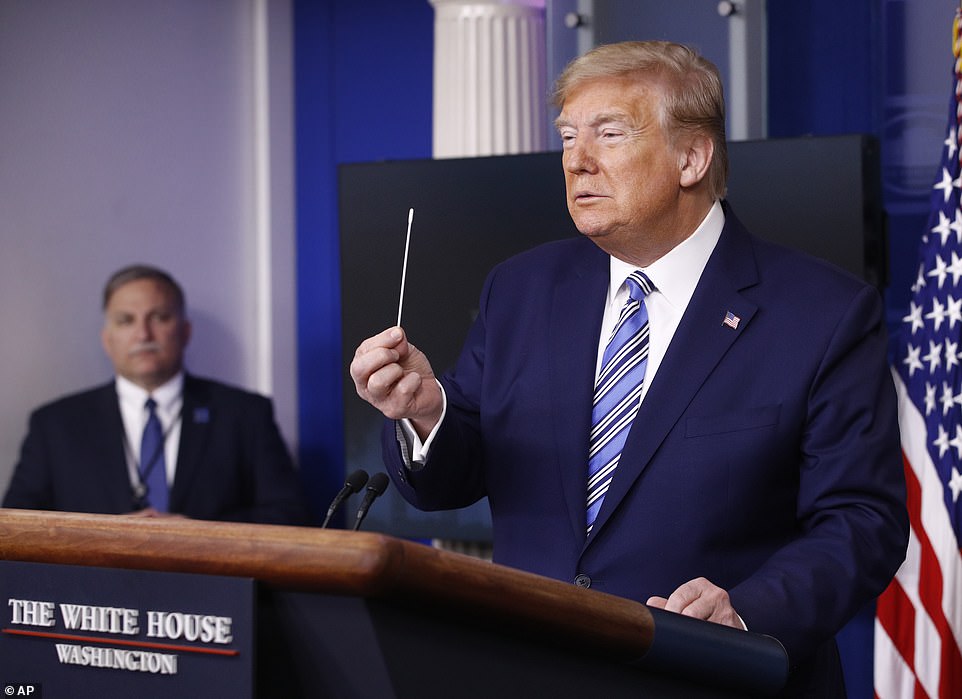 President Trump made some news at the briefing, saying he would use the Defense Production Act to have more swabs made 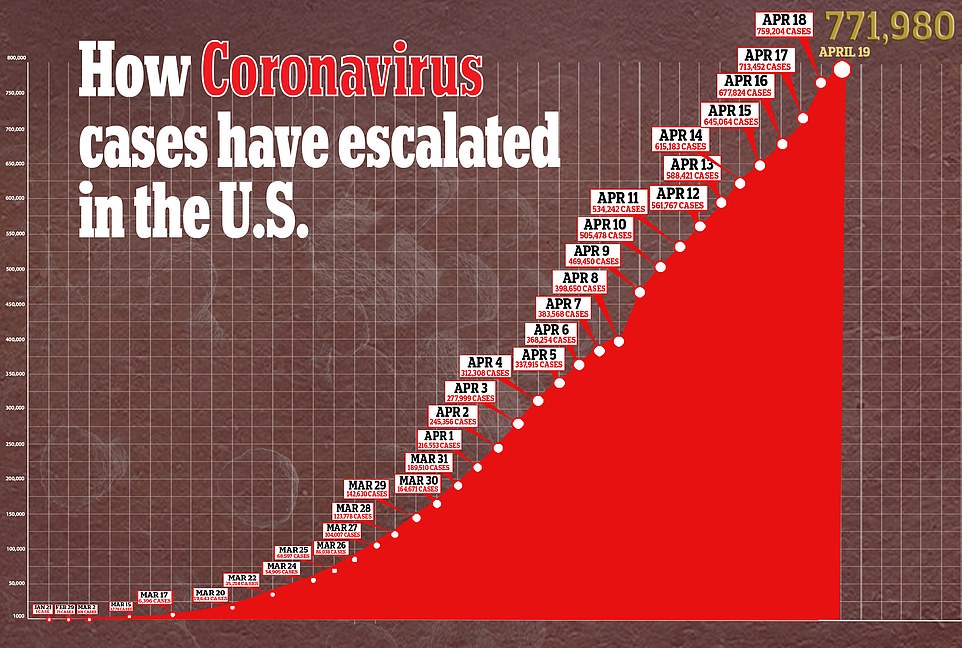 Trump hints at pardons for Paul Manafort and Roger Stone

President Trump hinted that pardons for his associates Paul Manafort and Roger Stone could be on the table.

‘You’ll find out what I’m going to do,’ Trump said at Sunday’s press briefing when asked by DailyMail.com if he would free the two men amid coronavirus concerns.

‘I’m not going to say what I’m going to do. But the whole thing turned out to be a scam’, he added.

On Friday night, Stone appeared on Fox News Channel and told host Tucker Carlson that serving time during the pandemic could kill him.

Last week, lawyers for Manafort, who is serving a seven-year sentence at a federal facility in Loretto, Pennsylvania for bank fraud and tax evasion, asked the Bureau of Prisons director if he could serve his sentence at home ‘for the duration of the on-going COVID-19 pandemic,’ according to a letter obtained by CBS News.

Later, spokesman Judd Deere passed along a note to the president informing him the second clip was ready to roll.

‘I just think it’s so good for people because it’s bipartisan,’ Trump said. ‘This is not about Democrats, Republicans,’ he continued. This is about a thing that hit our country, the likes of which has never happened to us before.’

In the second Cuomo clip, the New York governor talked about how the state ended up having the supplies they needed.

Cuomo had long feared about bed capacity and ventilators and in those areas the federal government had stepped in.

Trump had previously taken to Twitter to accuse Cuomo of ‘complaining’ – and suggested Cuomo failed to take advantage of federal help.

‘We built you thousands of hospital beds that you didn’t need or use,’ Trump fumed.

Cuomo responded in an extended monologue during his daily press conference Friday: ‘Show gratitude. How any times do you want me to say thank you? I’m saying ‘thank you’ for doing your job.’

‘This was your role as president, okay?’ he said.

‘We are going to be looking at it’: Trump says HIS hotels should get government bailout because coronavirus has been ‘devastating’ for them as he urges governors to let them open up again ‘relatively quickly’

Donald Trump on Sunday pledged to look into helping hotels left ‘devastated’ by closures in the wake of the coronavirus pandemic.

The president – who himself owns a number of hotels across the country – was asked about whether they will be offered help at his daily briefing.

After mentioning his ‘wonderful place’ in Doral, Florida, Trump said the closure of hotels ‘is a big problem’.  Asked about whether the small business relief would cover hotels, Trump replied: ‘Even if it is owned by a big chain, that is devastating.

‘If they have 200 hotels in the country and they are closed. We are going to be looking at it. It is a big problem. It is a lot of people employed.’ 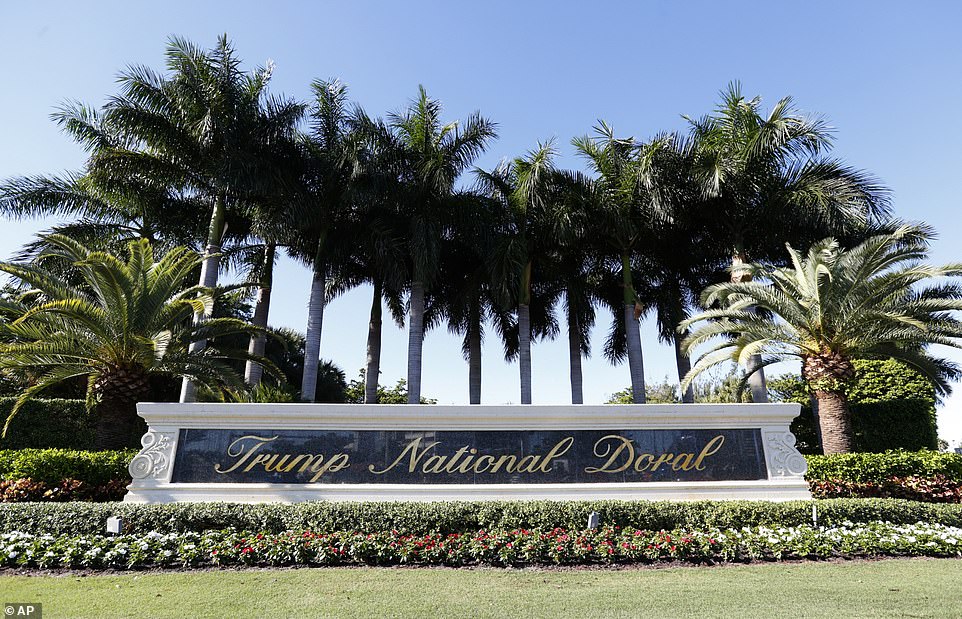 The entrance to the Trump National Doral resort is shown in Doral, Fla. Trump on Sunday pledged to look into helping hotels left ‘devastated’ by closures in the wake of COVID-19 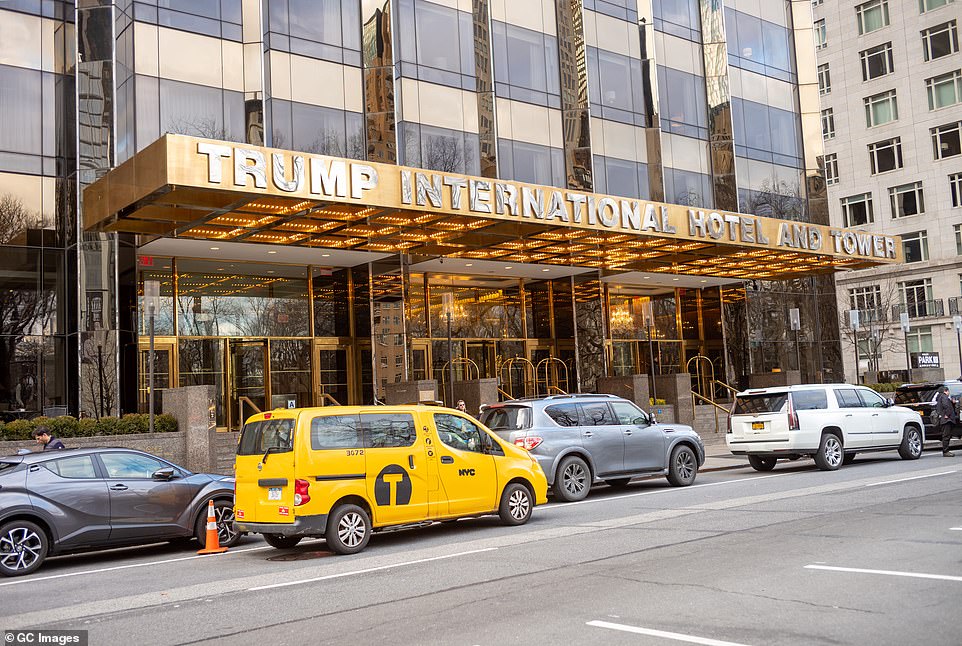 The Trump International Hotel and Tower on Columbus Circle in New York City. After mentioning his ‘wonderful place’ in Doral, Florida , Trump said the closure of hotels ‘is a big problem’. Asked about whether the small business relief would cover hotels, Trump replied: ‘Even if it is owned by a big chain, that is devastating’

Democrats and Republicans are near agreement on approving extra money to help small businesses hurt by the coronavirus pandemic and could seal a deal as early as Monday, Trump said Sunday.

An agreement on help for small businesses would end a stalemate over Trump’s request to add $250 billion to a small-business loan program established last month as part of a $2.3 trillion coronavirus economic relief plan. That fund has already been exhausted.

Trump said Sunday: ‘You have hotels that are massive buildings but if you have no income coming in…they have to be closed down. It is a terrible thing.

‘I don’t know that they are working on that specific problem but it is a problem they should be talking about.’

Discussing owners who go from ‘having a successful hotel’ with thousands of employees ‘to all of a sudden closing it down’,  Trump added: ‘Hopefully they will be able to open up relatively quickly.’ 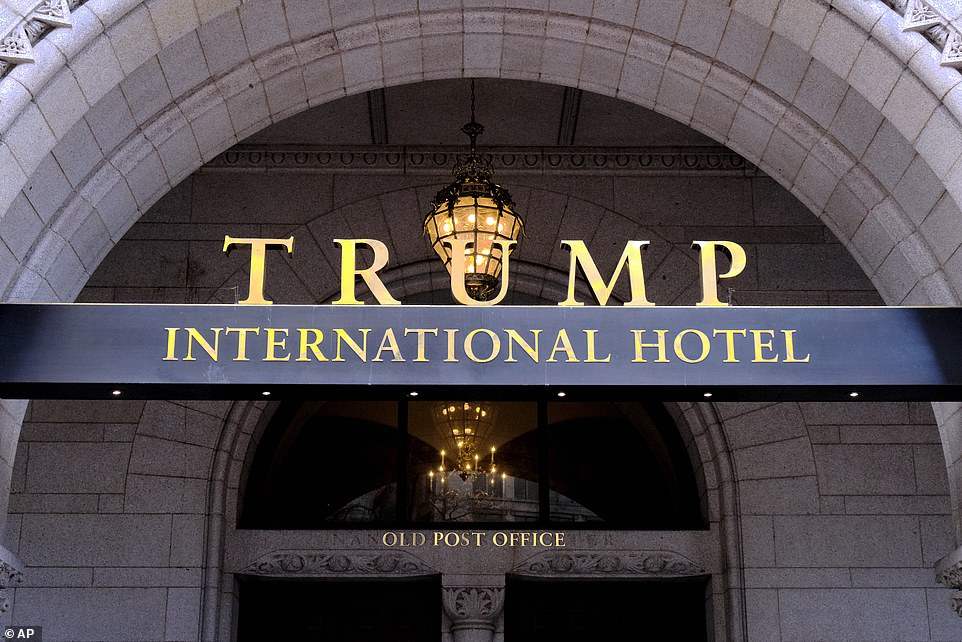 The Trump International Hotel is seen in Washington. The president – who himself owns a number of hotels across the country – was asked about whether they will be offered help 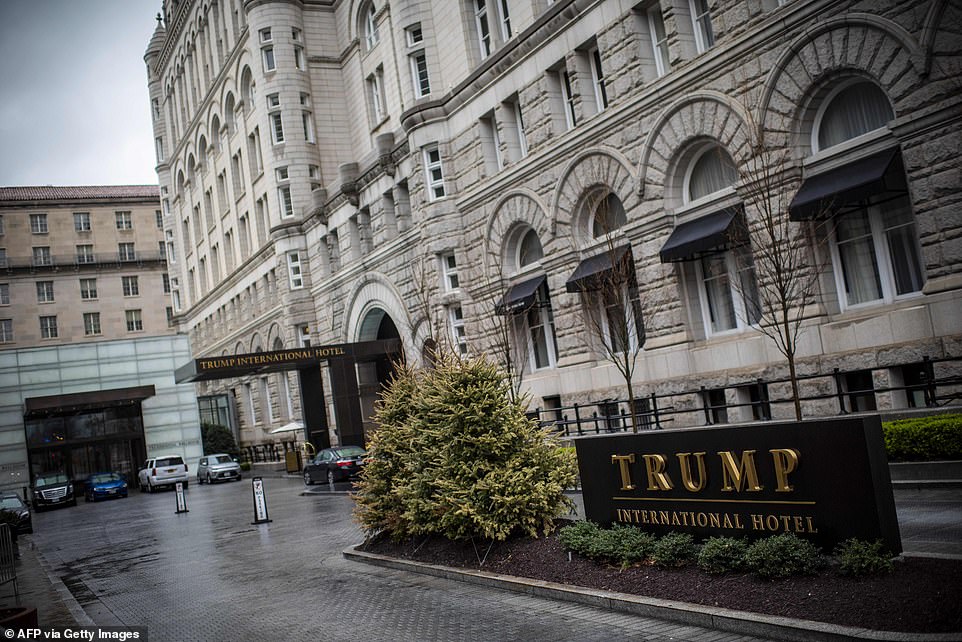 The main entrance of the Trump hotel in downtown Washington is deserted on March 25. Democrats and Republicans are near agreement on approving extra money to help small businesses hurt by the pandemic and could seal a deal as early as Monday, Trump said Sunday